I have a bit of a soft spot for the Brompton. If I ever have a spare £1k knocking about(!) buying a Brompton is definitely on my list of things to do. It is a triumph of design - no other folding bike comes close to the footprint of the Brompton - it seems to fold to a size that is even smaller than the sum of its parts. They are also all made in a factory in Chiswick (London) and each bike can be traced back to who made it. They have been accused of being slow to innovate and to leap onto new technologies, but to be honest, they do just "work". 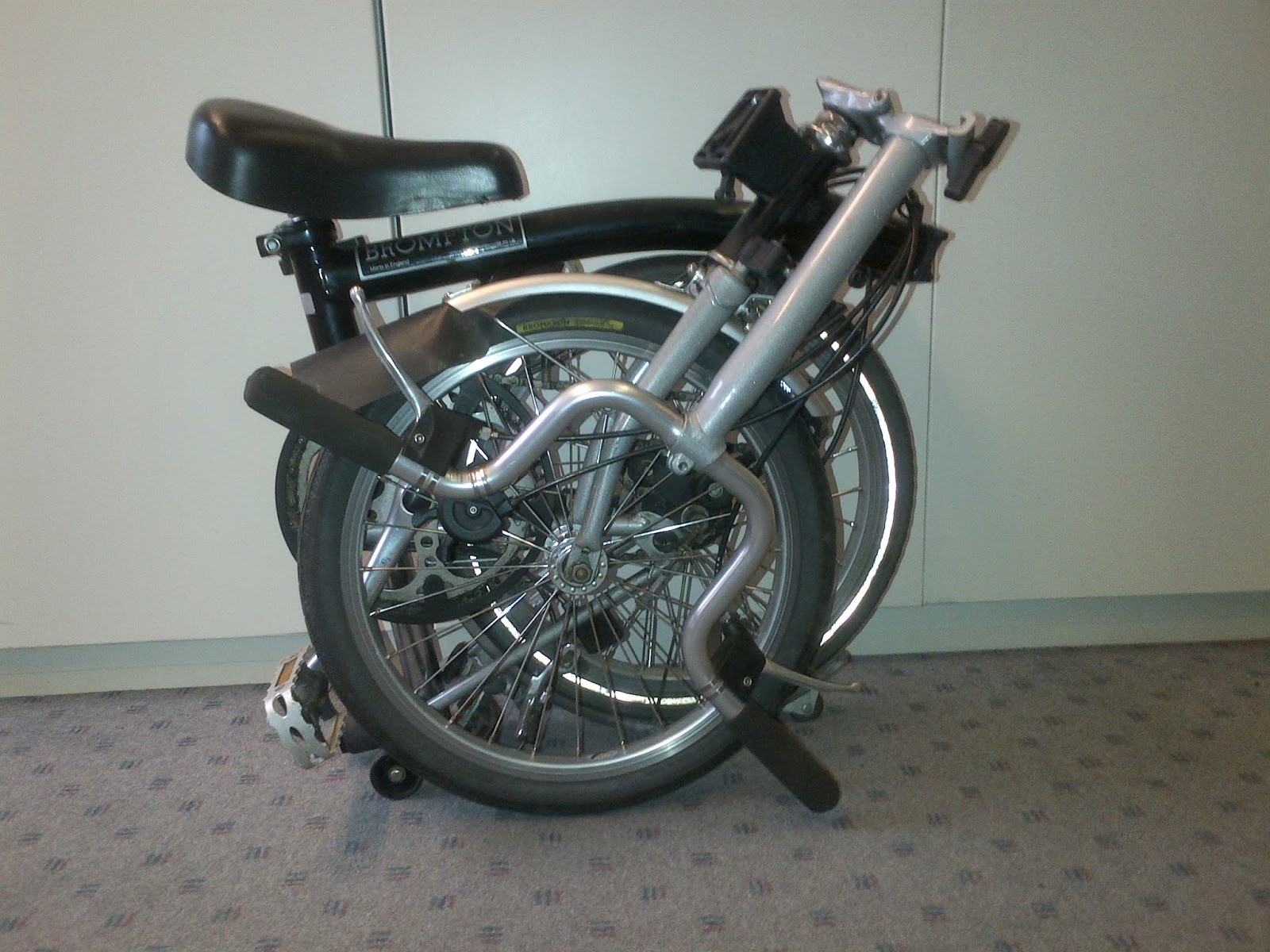 £1k is an exaggeration - the most basic bikes start at around £600 - and thank you very much to Munir from work who kindly lent me his bike so I didn't have the excuse to buy one!!!

Also, really lucky today - I had the pleasure of some company for my Brompton bike ride! 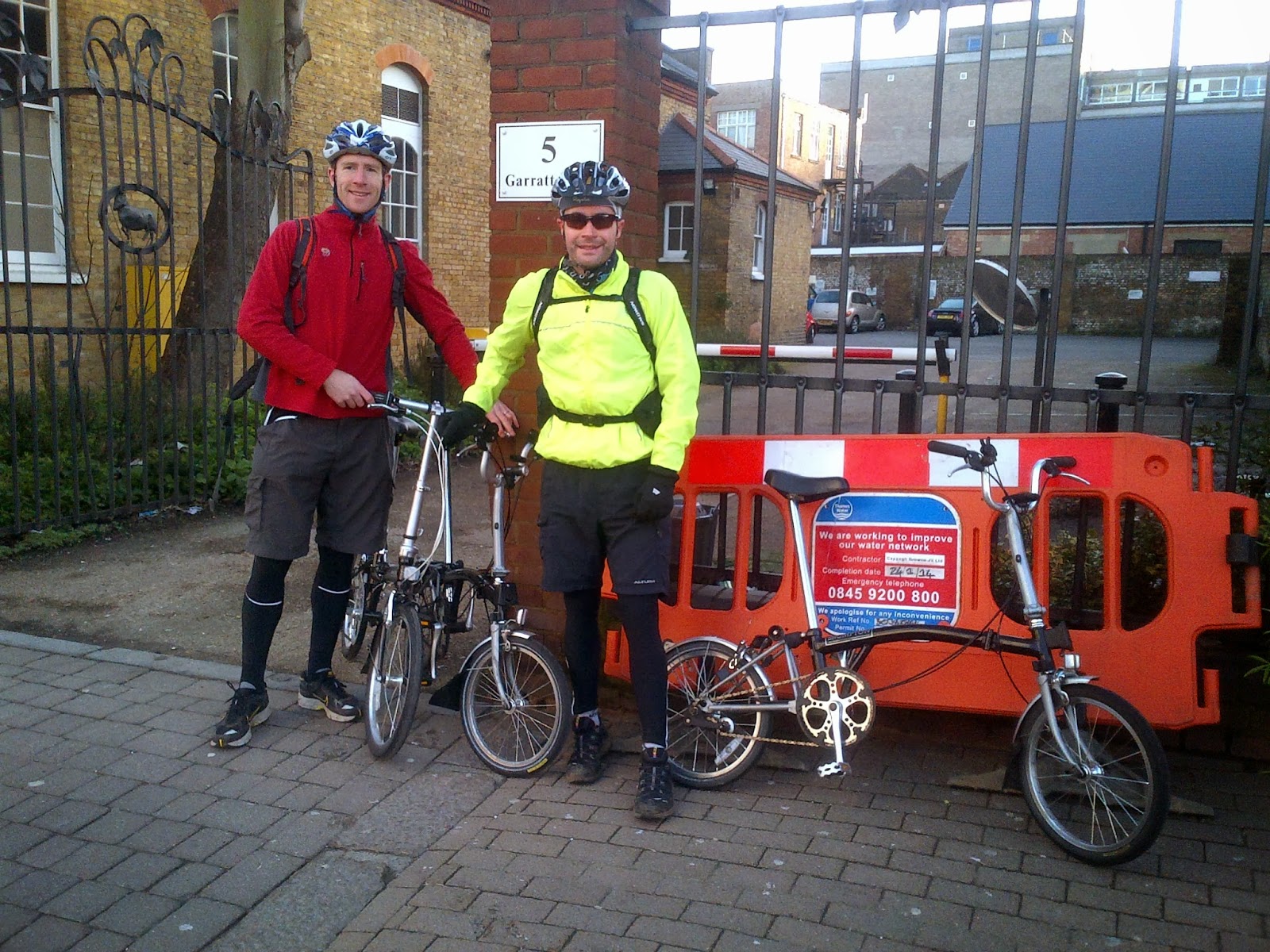 Chris, who I used to work with and his friend Rich got up very early today (especially Rich who drove to Brighton from Bournemouth, caught the train up and then met up with us at Wandsworth) had very enthusiastically offered to join me. Chris was claiming that they were both not "bike fit", but to put this into perspective, Chris has run a sub 4 hour marathon wearing a chicken outfit and he knows Rich from running. Rich was also cheating by riding a Dahon (slightly bigger wheels!). They both looked pretty cheerful as we set off! 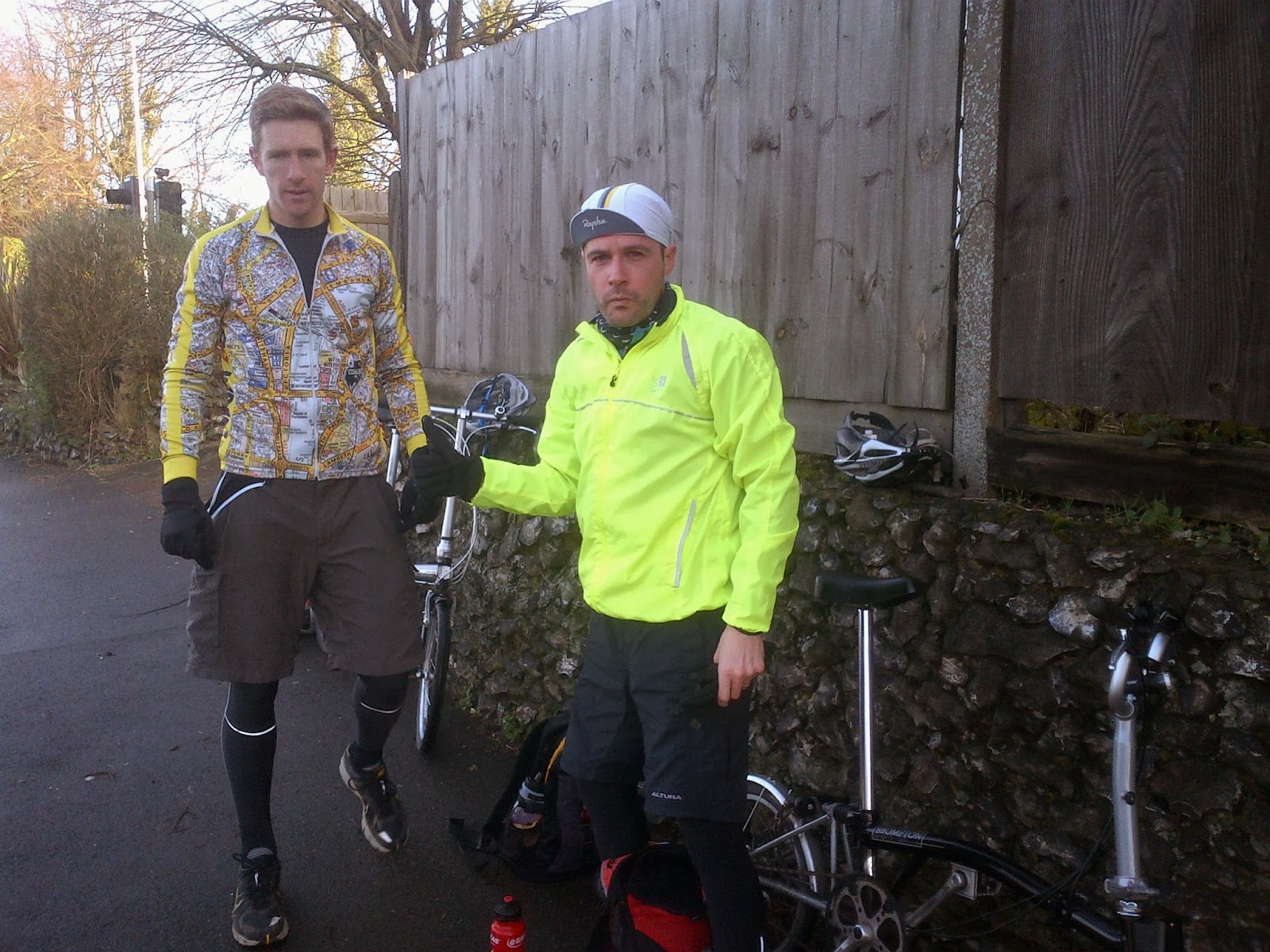 It was a lovely day, but by the time we got out of Croydon, I think both Rich and Chris had learnt that Bromptons really are more suited to relatively short pootles through town and that a long distance ride probably wasn't the best (they were smiling slightly less!). I however, was really enjoying the ride. The short wheel base makes the bike quite "twitchy" and the 3 speed sturmey archer gear box almost worked best by back-pedalling when you changed, but it felt like a bike with character...
﻿ 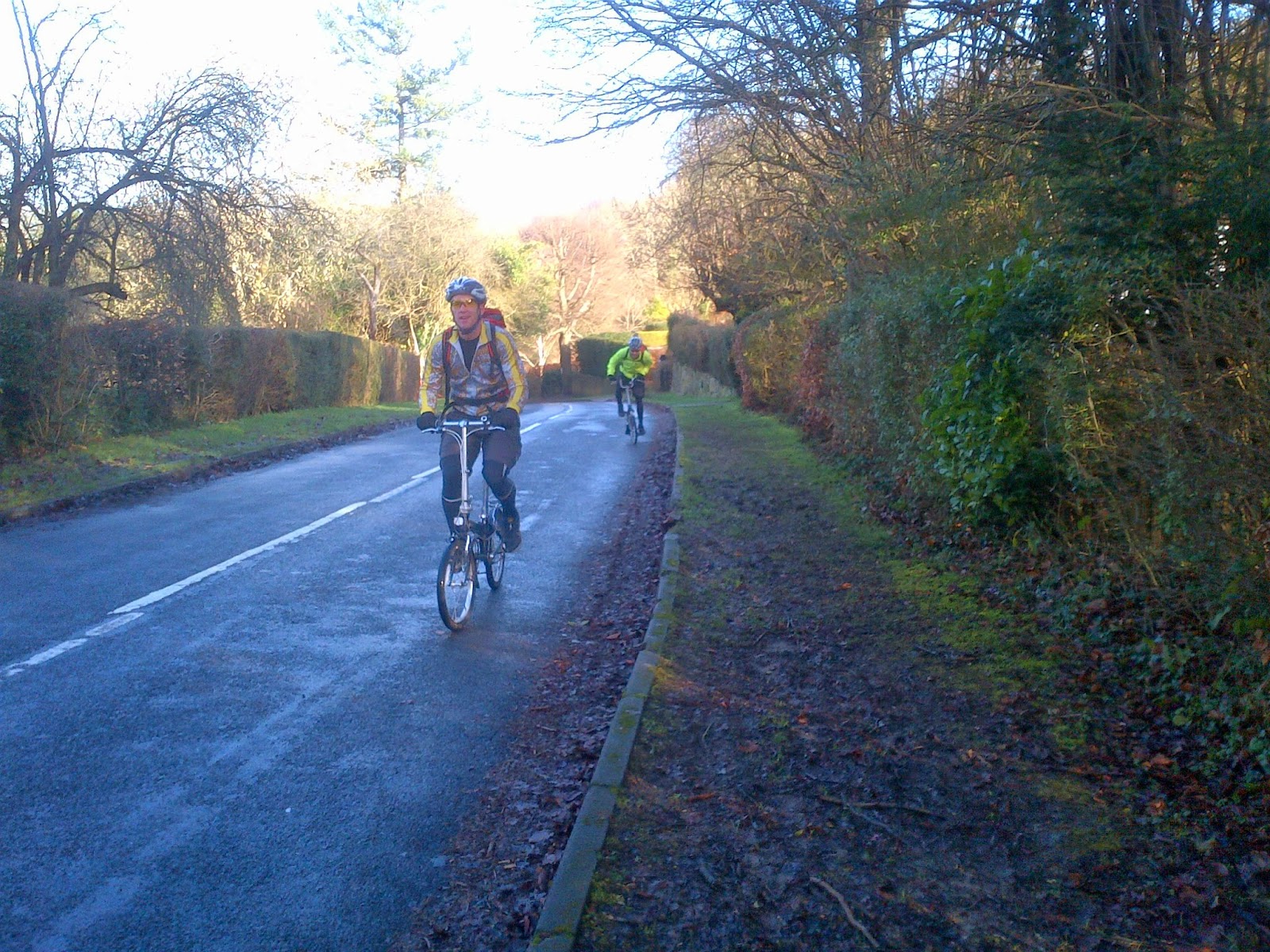 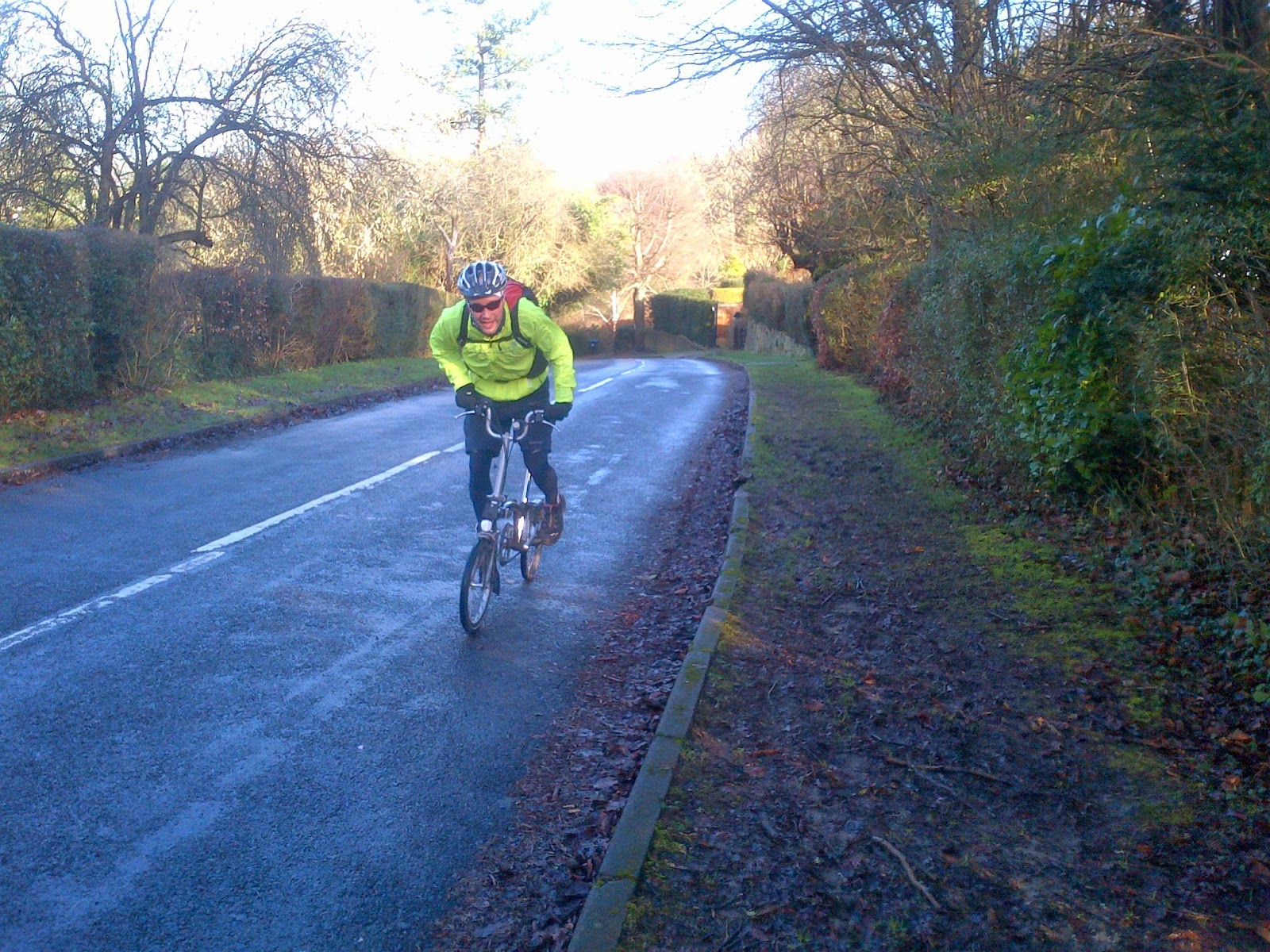 Hills were a challenge - there wasn't the natural out of the saddle position that you get on a "normal" bike and the saddle was "rustic", but everything was eminently possible - and the weather was fantastic. 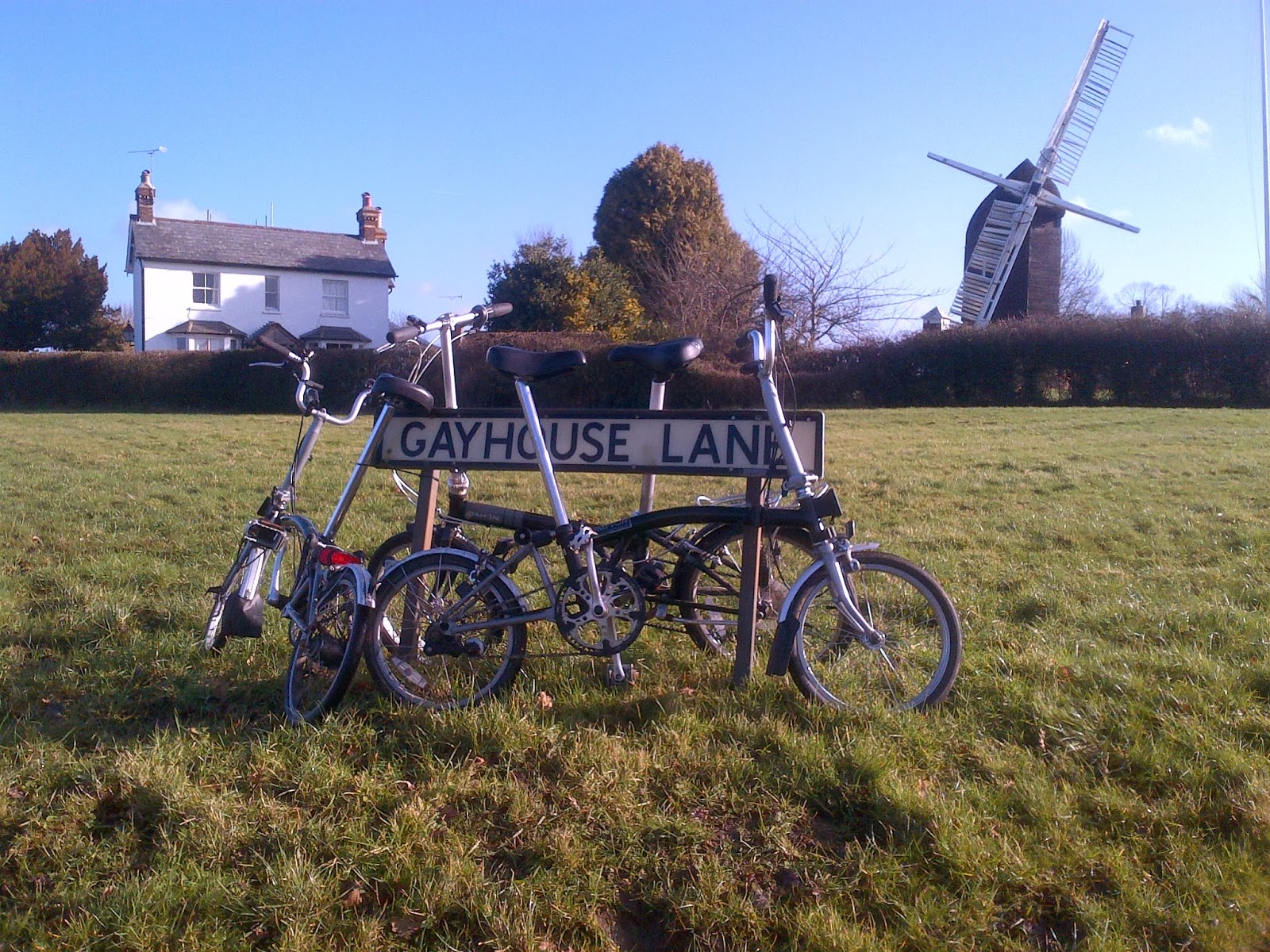 We stopped regularly for drinks and to keep energy levels up - and for the "usual" photos. The Brompton doesn't have "bottle cages" so we kept everything in backpacks and had to stop if we needed to rehydrate. 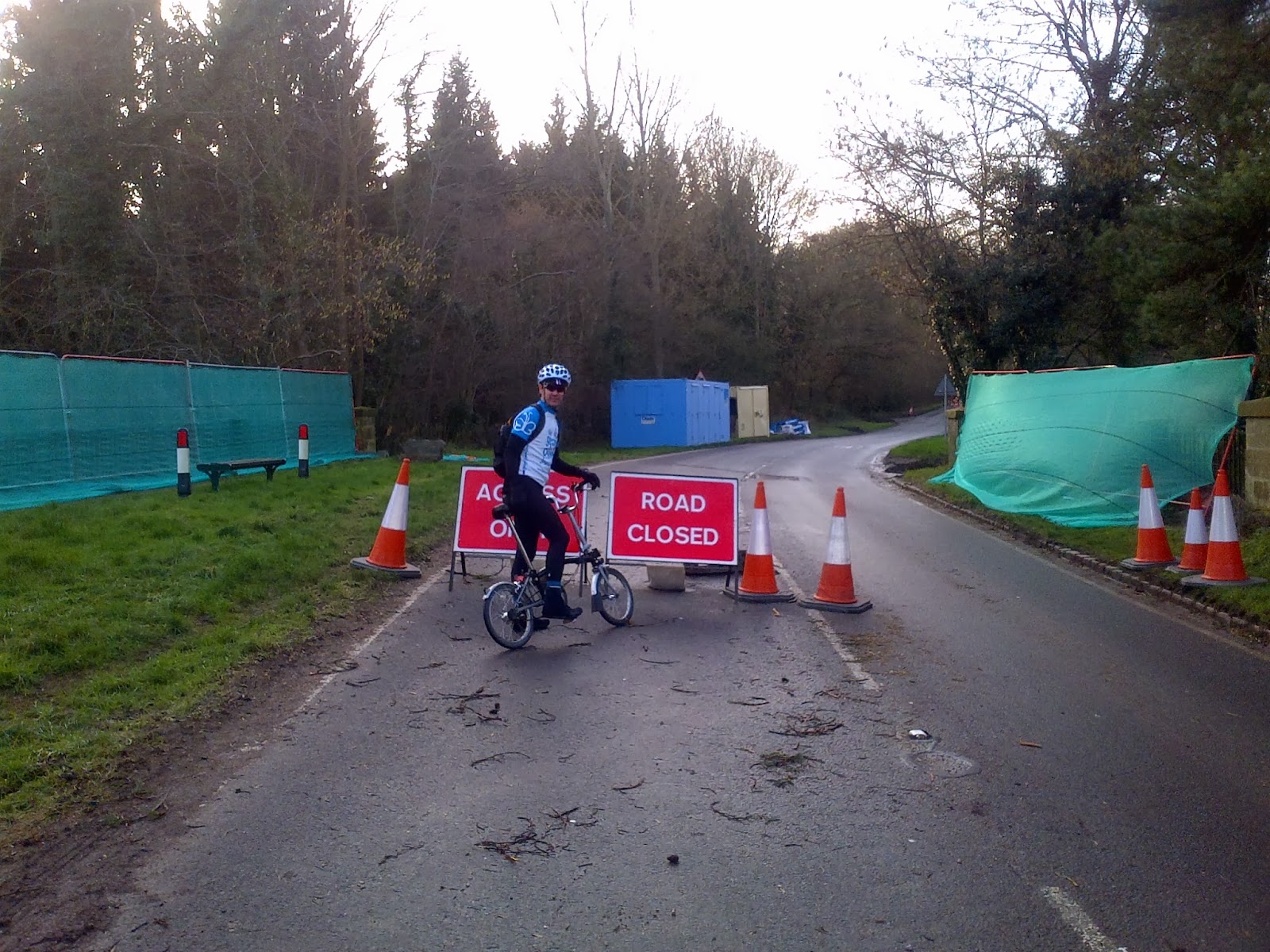 It was great riding with people and the time passed by really quickly and without a hitch - although we did have a bit of a concern coming into Lindfield where there were massive "road closed" signs up everywhere. Fortunately we could get through ok on bikes and although the road was pretty mucky, it was accessible enough. We stopped in Ditchling before tackling the Beacon (my Northern companions were pretty damning about the seeds and the balsamic accompaniment with their cheese and ham toasties!) 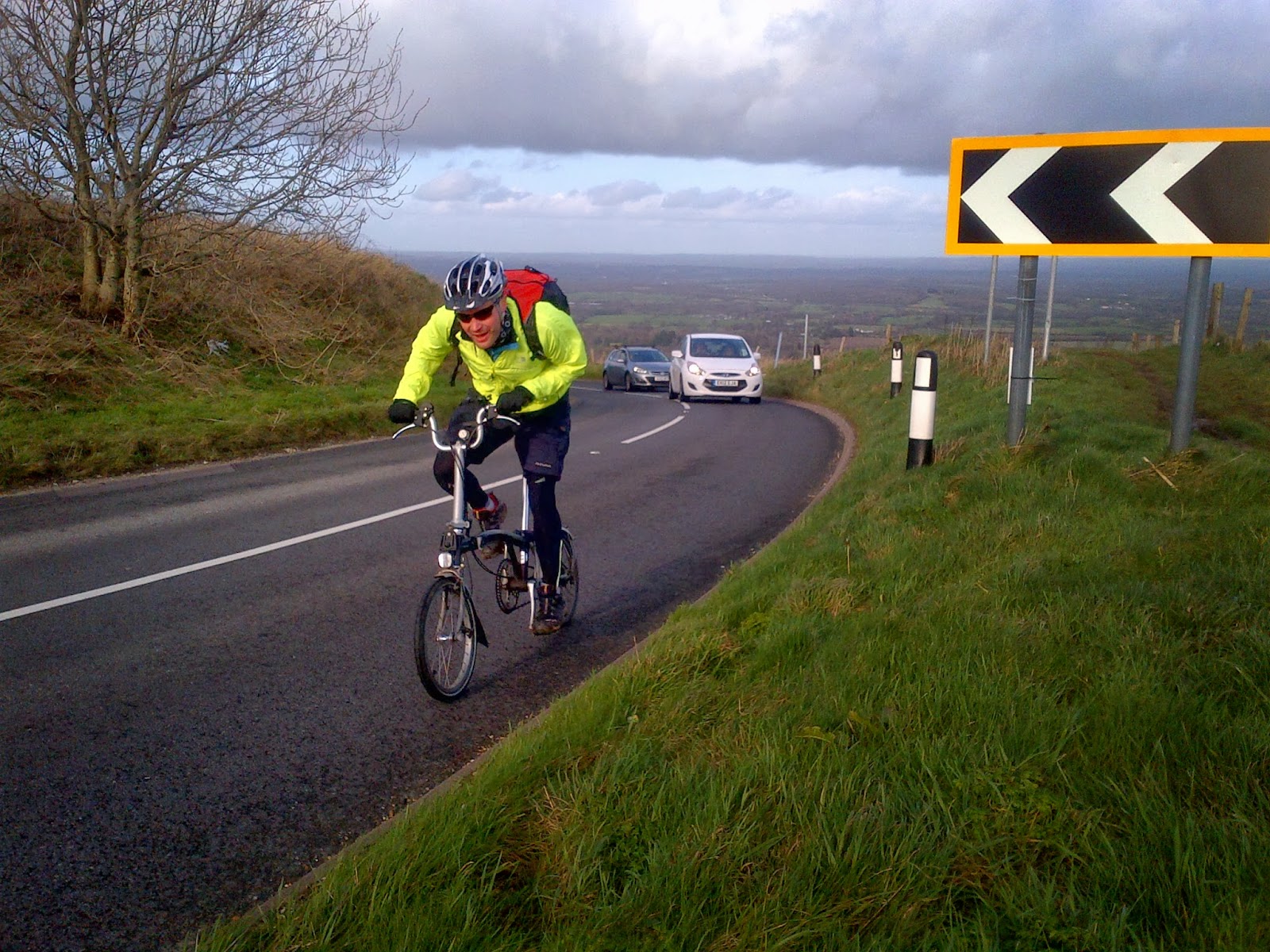 We all got up ok - although Chris stopped to "peruse the scenery" at one point! The journey did not pass off entirely without a hitch though - Rich punctured midway through and we ended up washing the oil off our hands with puddlewater(!) and Chris very unfortunately punctured 400m short of Brighton Pier! Which meant our first act there was to mend the bike! (no easy task with a hub-geared bike). 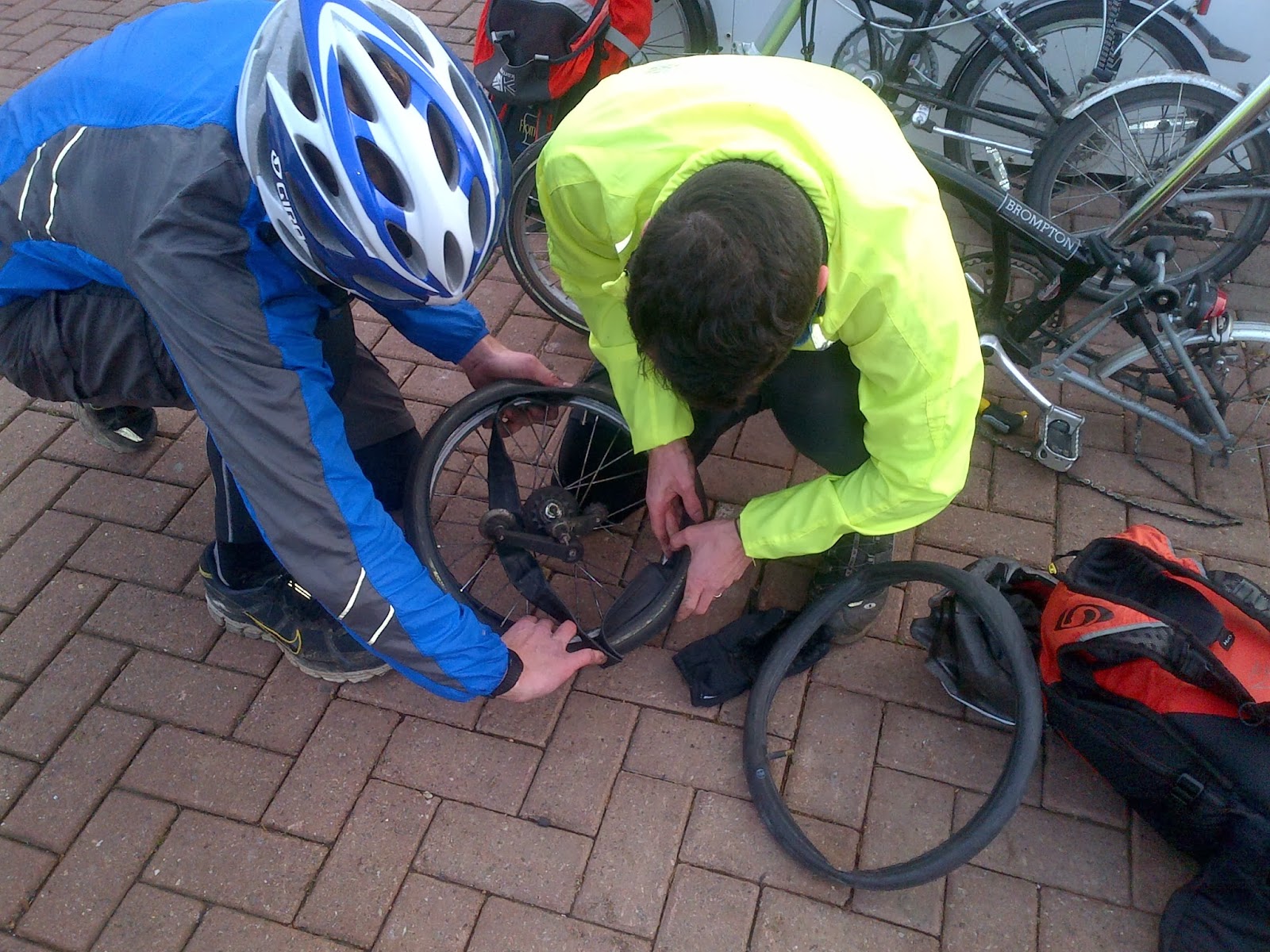 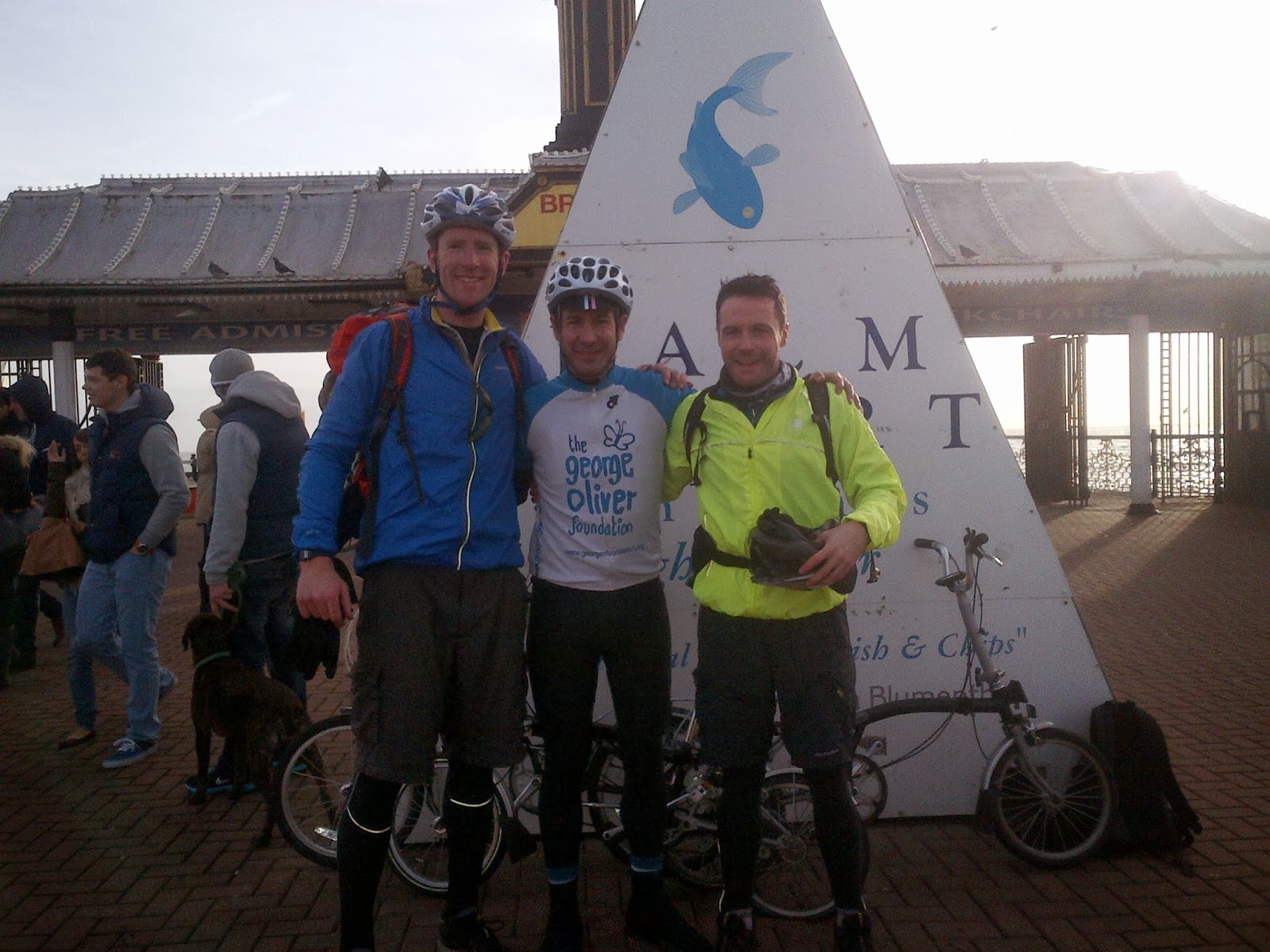 Thanks guys for a really great day of cycling - and THANK YOU Chris for your fantastic fund-raising as well. Legend. http://www.justgiving.com/ChrisFletcher-Brompton