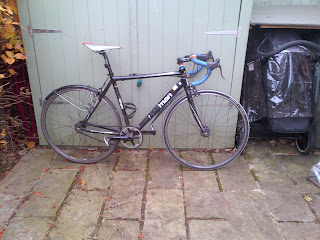 "What's that Mark? That's just a Racer" I hear you cry. Look carefully.

"OK, it's just got one gear - but so has a BMX and it has smaller wheels and you did that last ride" I hear you say. Look more carefully. 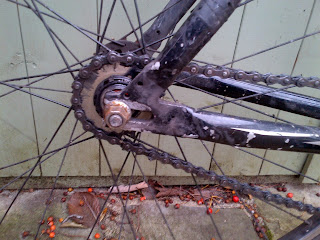 "Hang on, that cog at the back doesn't have a freewheel - that means every time the wheel goes round, the chain goes round and so the pedals go round too!" Yes - this ride was on a fixed gear bike - so named because the single gear is "fixed" meaning if you turn the pedals, the wheel turns, if the wheel turns the pedals turn.

This means on the ride to Brighton, I had to pedal every single wheel revolution of the way - there was no freewheeling down hills, no resting my legs and taking it easy, it was continuous hard graft the entire way!!!!

This is the bike I commute to work on. I bought it on the cycle 2 work scheme 4 years ago. It lives outside, it does 8 miles to work and 8 miles back Monday to Friday. It receives very little care and attention. It has been battered, dropped and scraped. The seat is peeling, the paintwork is chipped, the bar ends have been lost, its covered in tape. I had to "true" the wheels (tighten the spokes) once because the wheels had gone out of true a little bit, change the front and rear rings once, the tyres twice and the chain a couple of times. Other than that, I've had to do nothing to this bike - and that is one of the beauties of a fixed gear bike - there's nothing to go wrong on them.

You've probably seen a fixie rider go past you. Probably with an elaborately sculpted hair do, implausibly skinny jeans, thick dark framed glasses, one brake on the front (or even no brakes) and very unlikely to have stopped at a red light. There is another type of fixie rider who believes having the one gear makes you at one with the bike and that it is a spiritual experience. Well, I'm the other sort of fixie rider - I ride fixed because it gives me an extra brake (if you stop pedalling the rear wheel stops) and they are cheap and easy to run.

And this is the bike I rode to Brighton. This morning I pumped up the tyres and got on it and rode. The ride to Brighton is about 50 miles more than I have ever ridden in one go on the bike before, but at least I was pretty sure that I fitted the bike and that I wasn't going to have any issues with it. Those were famous last words! 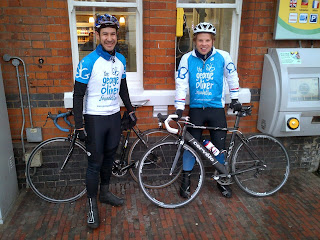 A crisp, slightly blowy morning saw me take off from Barnes and follow my usual route through Putney, Tooting, Croydon etc with a big difference - as with my second ride, I stopped to pick someone up at Purley. This time it was Elliott who has recently ridden London to Paris for the Foundation. That ride was a bit of a leisurely stroll - so I was interested to see if he'd keep up the pace on a brisk ride to Brighton. The first thing that he did when I arrived was pop to the loo (for what seemed like half an hour), so he was obviously trying to keep as light as possible! 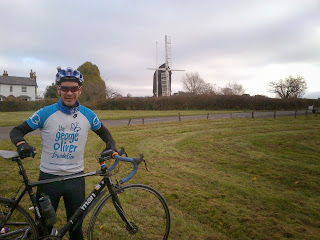 It was really nice riding down with someone, although it was a little bit annoying when we hit a downhill slope. Basically at that point, the bike would want to go fast, but my legs could not spin around fast enough to go any more than about 27mph. Elliott would then cruise past, without pedalling, enjoying using gravity and momentum and slowly disappear into the distance. 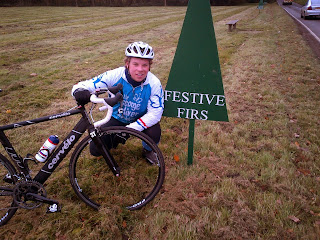 Although he regretted doing that when he missed a turn off!

So we picked up my traditional windmill photo - and it is obvious what time of year I took this photos - Christmas tree purchasing time already!!!! 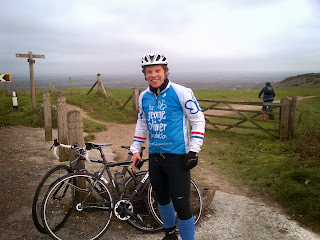 We stopped at the Co-op in Lindfield to fill up with sports drink and crisps and Elliott confessed that he was not feeling quite as chirpy as he was at the start of the ride. I noticed as we rode through Ditchling that he had started to drop back and wondered how he'd manage with the challenge of "the beacon". I managed to get up most of the hill - but then got caught behind a car behind a cyclist going very steadily, but very slowly. The problem was, with the gear that I was running, I just could not keep the pedals turning over at a pace that would keep me upright. Then when I got off the bike - my calf started to cramp. Hence a small push up the hill - gutted. Elliott manfully plugged away, but did confess that he was ecstatic to have got up the hill - the toughest he has ever done apparently! 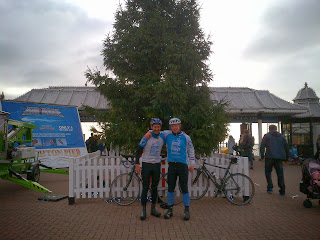 The downhill into Brighton wasn't as smooth as I hoped it would be - basically the speed was such that my chain hopped off a couple of times, but despite this minor mechanical - it was  resolvable pretty easily and quickly. Christmas tree had just gone up at the pier too! I've got to say, my legs were very very stiff at the end of it - never getting a rest is not the best thing!

Right, just one ride behind now!!!!