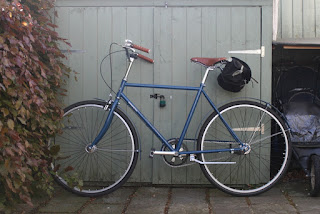 I've got to say that when I picked up Gustav, my first reaction was "wow" - he is very handsome and then a little bit - "uh-oh" as he had big fat tyres, a 3 speed sturmey archer hub (hub gears), one brake lever and a rear "pedal back" brake! This is like a Pashley or a Dutch Town Bike - built for comfort, built for durability and probably built for shortish journeys. Not necessarily built for 60 mile rides and steep hills!

This looked like an ideal bike for getting around town - and it is. I was slightly cheered up by the ride home from work on the Friday that saw a number of overly competitive racing bike types slightly cross at me regally sailing by them on Gustav - the body position may be unaerodynamic and the bike might be heavy compared to a light racer with comparatively limited gearing, but it was a nice ride, comfy on bumpy rides and it was up to me to make sure it went as fast as it could! 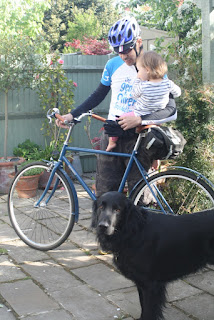 I got my usual send off from the family early on Saturday morning - the plan was for me to cycle up to Purley and to meet Phil and Nick from Baltic Bicycles at Purley train station where we would all cycle to Brighton together. I thought about putting my special bike pedals on Gustav, but then thought this would be cheating somewhat - no need to deface Gustav's good looks! 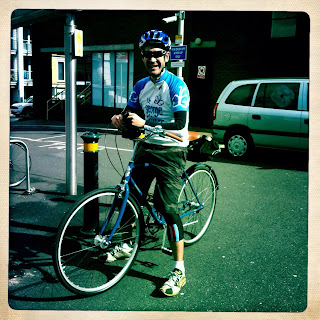 There is something about the more upright position on a town bike that does feel good - you get a good view over cars and you look around a little more. I was also pleased that this position did not seem to have an undue effect on my overall speed - I was a little slower, but not noticeably so. The fatter tyres made the ride very comfy and actually just having 3 gears made you just sit in one and pedal a bit faster/slower depending on the gradient. 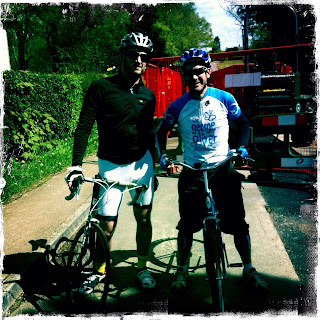 By the time I got to Purley station I was really looking forward to bumping into the other 2 on their bikes and promenading gracefully down to Brighton together. Imagine my surprise (and slight worried horror!) when I discovered that the Baltic Bikes boys had dusted off their smart racing bikes for the trip down, were clad in lycra and wearing bike shoes! They mollified me by telling me that they didn't want to hold me up(!) and we took off. Far from making things easier for me by providing a draft that I could follow, rather cruelly they both tucked in behind me (no doubt to check out on the performance of Gustav) and we headed on down. 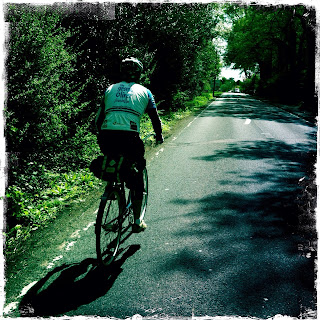 It was really nice riding with some people - even though they were on racers and to chat as we plugged away. The weather was pretty good, a bit of a head wind, but nothing to complain about and we made really good time. 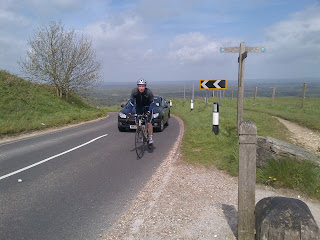 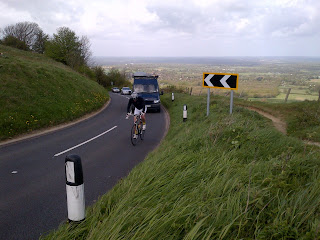 The hills were a bit difficult on Gustav - he is really made for cruising round a city, not keeping up with the lighter racing bikes that also have a slightly better position for "pushing" on the pedals. As you are sat a bit further back you kind of had to grab the bars and use them as a brace to get the power through the pedals. I would like to point out that I didn't have to get off until I got to Ditchling Beacon (which did defeat me). I would also like to point out that operator error meant I couldn't put Gustav into bottom gear on the 3 speed hub which was very difficult! Bit gratifying was that the Baltic boys also had a few issues getting up as well!


Highlights of this journey were that the "closed" road that I had encountered on my last trip was still "closed" - although works had moved on about 50 metres(!). The much welcomed drink and crisps at Turners Hill in a pub that could have been MADE for London to Brighton cyclists (much like the old faithful co-op that I stopped in shortly afterwards to get more meaningful food!) 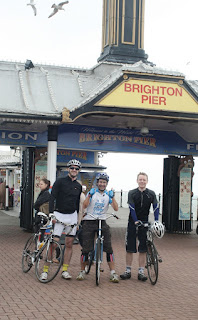 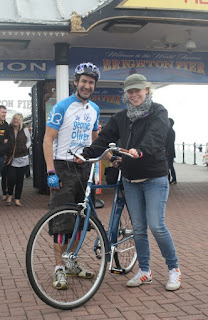 ﻿
It was a really good ride all told - thank you very much the Baltic Bike guys and thank you to Gustav - details are here - a bit slower than the Minivelo, but not too shabby!