Ride 1 - London to Brighton on a Dahon Minivelo

So, my first ride was undertaken today on the following bike: 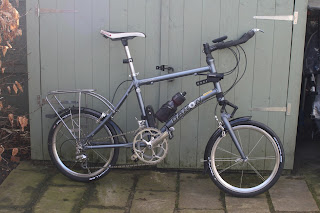 It is a Dahon Hammerhead and this type of bike is commonly called a "mini-velo". Basically it has small (20") wheels (usually 26" or 28") and a more compact frame. They are really popular in Japan where space is at a premium and the idea is that you take the pedals off, take the bars off and push the saddle down and the bike footprint is a lot smaller.

This bike is really special to me. I bought it on a bit of a whim a few years ago (it was heavily reduced and I'm a sucker for a "bargain"). I used it for commuting a fair bit - small and nippy, it has a little bit of suspension at the front which is good for soaking up road buzz and it did me proud. I then started riding a "proper" single speed road bike, so this took a bit of a back seat.

Then when George was born, I put some chunkier tyres on and a child seat on the front and it turned into a great way to take him about and we loved it. As such, I was pretty keen for it to be the first bike that I took on this challenge.

I also carry Mila on it (and she loves it too) and there is a trailer that we've taken Hobbs in off the back (he loves it not so much)...

The weather forecast was pretty rubbish so the previous night, I set the bike up in the front room, changed the tyres, gave it a good clean and fitted a set of mudguards. This all took about 5 hours and I ended going to bed at about 1am - not great preparation for the ride.

Up slightly later (but still earlier than ideal!) I set off. It was a bit of a grey day, but not raining thankfully. I posed for the obligatory photo with Mila and Hobbs: 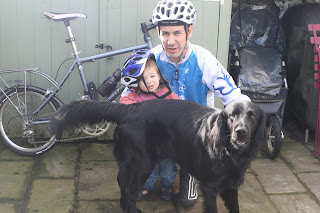 and set off on my way. Dog very upset to see me go of course! 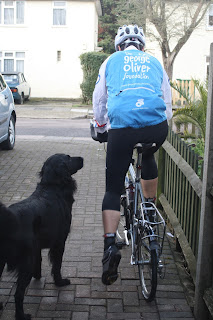 The initial part of the ride (just getting out of London) is not that inspired - and I did my usual failure to navigate properly on the Garmin which involved a couple of wrong turns and a bit of getting the wrong side of a train line and a shopping centre which I managed to sort out. There are a couple of climbs on the route - basically, the first 20 miles or so is a gradual uphill with a real steep bit near Caterham School. Things were fine though, the bike was behaving well, I was not as quick as I wanted to be, but I never am. I did struggle a little bit up Caterham Hill though which was concerning with Ditchling on the horizon!
Then there was DRAMA! A road closed! I saw the signs and thought I'd cycle up to see what the score was and whether the footpath was open and I could get through (and to get some photos of course!). The guy who lived by the side of the diversion was obviously fed up of people driving up and turning around and said (somewhat caustically) "the road is closed, can't you bloody well read?" 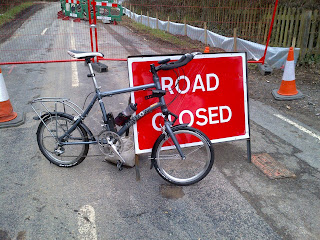 So I said hello (politely) hopped off my bike, pushed it round the obstruction and carried on my merry way! 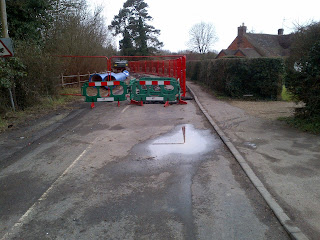 
The rest of the ride was pretty uneventful - a couple of people passing far too close, a massive pothole outside the home where my Grandad resides which almost got me, but apart from that it was fine. I got massively hungry at Lindfield and ran into the co-op there quickly to stock up on energy and the Guide Dogs collecting outside got a pound - beautiful dogs make it hard to say no!

The only real problem I had was when I started climbing up Ditchling Beacon. I've ridden up Ditchling many a time (my 100 hills challenge is here: http://www.100hillsforgeorge.blogspot.co.uk/2012/01/hill-no-77-22-ditchling-beacon.html) but I was finding it hard going, it was raining and the temperature plummeted as I went up. By the time I got to the top, I was freezing (and boiling!) and soaked through too... The worst bit about this was that it is pretty much downhill into Brighton from therein and a downhill means you just get colder and colder. I got into Brighton and had the obligatory pier shot with the family: 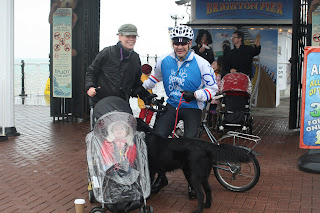 and then went off to the pub where I was so cold I almost couldn't get changed. I drank a lot of hot drinks! The one thing that did make me laugh on the run in was the very cool (young) bloke in the old Scimitar sports car - I complimented him on the car (my Dad had one years ago) and I briefly saw a flash of pain cross his eyes as he said "yes, its not the most practical". I reckon he has probably had a lot of problems with it!

If you click on the link below that says Strava, you will see the details of the ride. I was pretty happy with the average speed for getting down there - I think there are going to be plenty of rides slower!
Strava Link is here﻿
Posted by mroli at 16:07 No comments: