So, daylight broke on this, the last of my 12 rides. I was riding this one with Emily - my wife - and this is the first proper ride over 20miles that she's done since giving birth to Orly 8 months ago (and for a good while before that too!). We had hoped to do this ride on "Wiggo" - the tandem that we bought just after George died and that helped us immeasurably keep our heads together, work together and stay sane. However Wiggo needs some restorative work doing to him and we were running out of ideas (and time!) 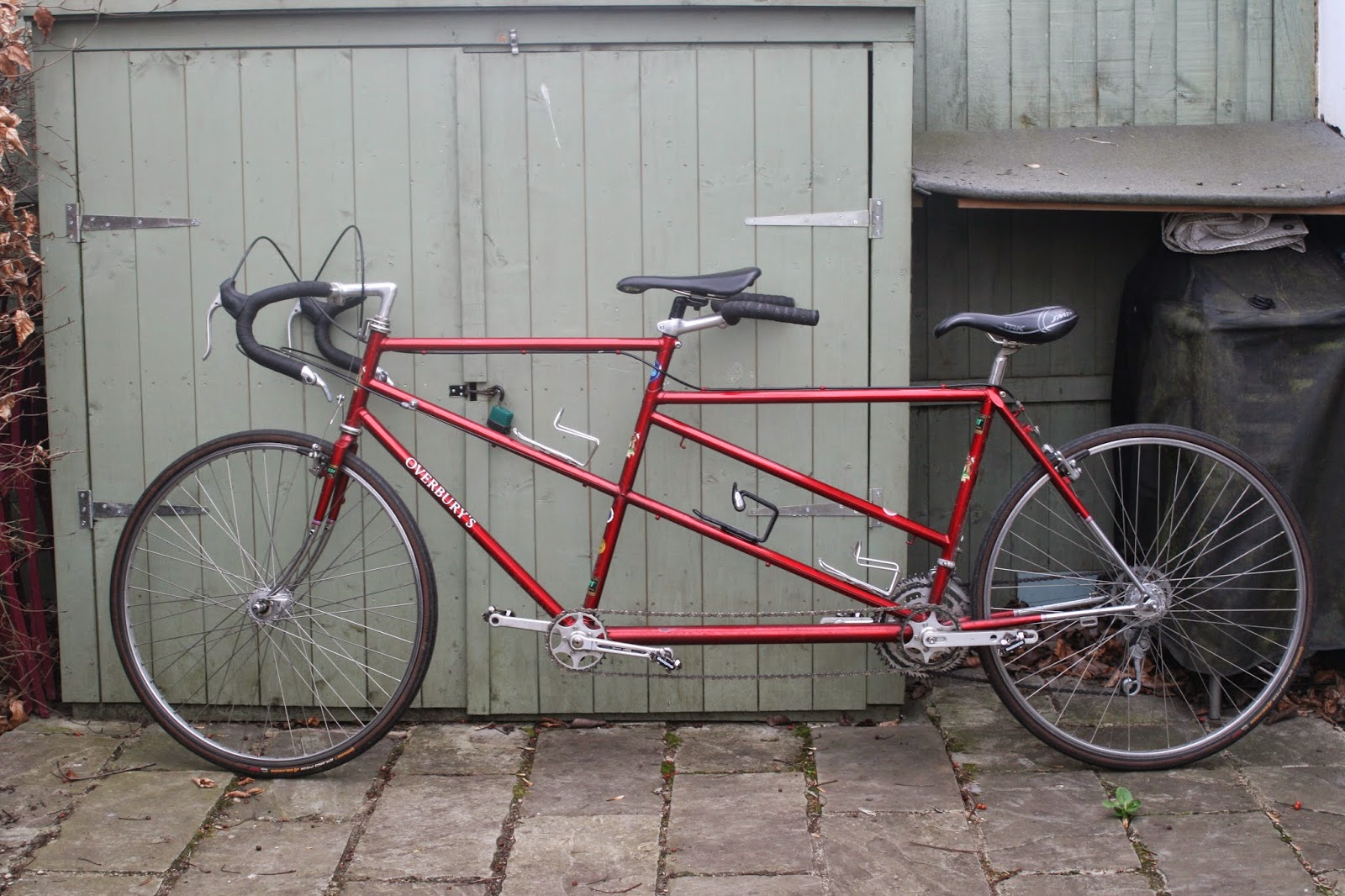 Amazingly though, Chris Baldwin from my work said we could borrow his tandem - this originally came to him from a man called Richard Chandler that we used to work with. Richard died a couple of years ago - he was a really nice guy. A proper Man U fan - he used to know everything that was going on with not only the reserves, but the youth team as well. He used to come in and chase for timesheets - but I think he only did that to come and talk about football! So it was really nice for me to ride on a beautiful bike that he originally owned - thank you Richard and Chris. 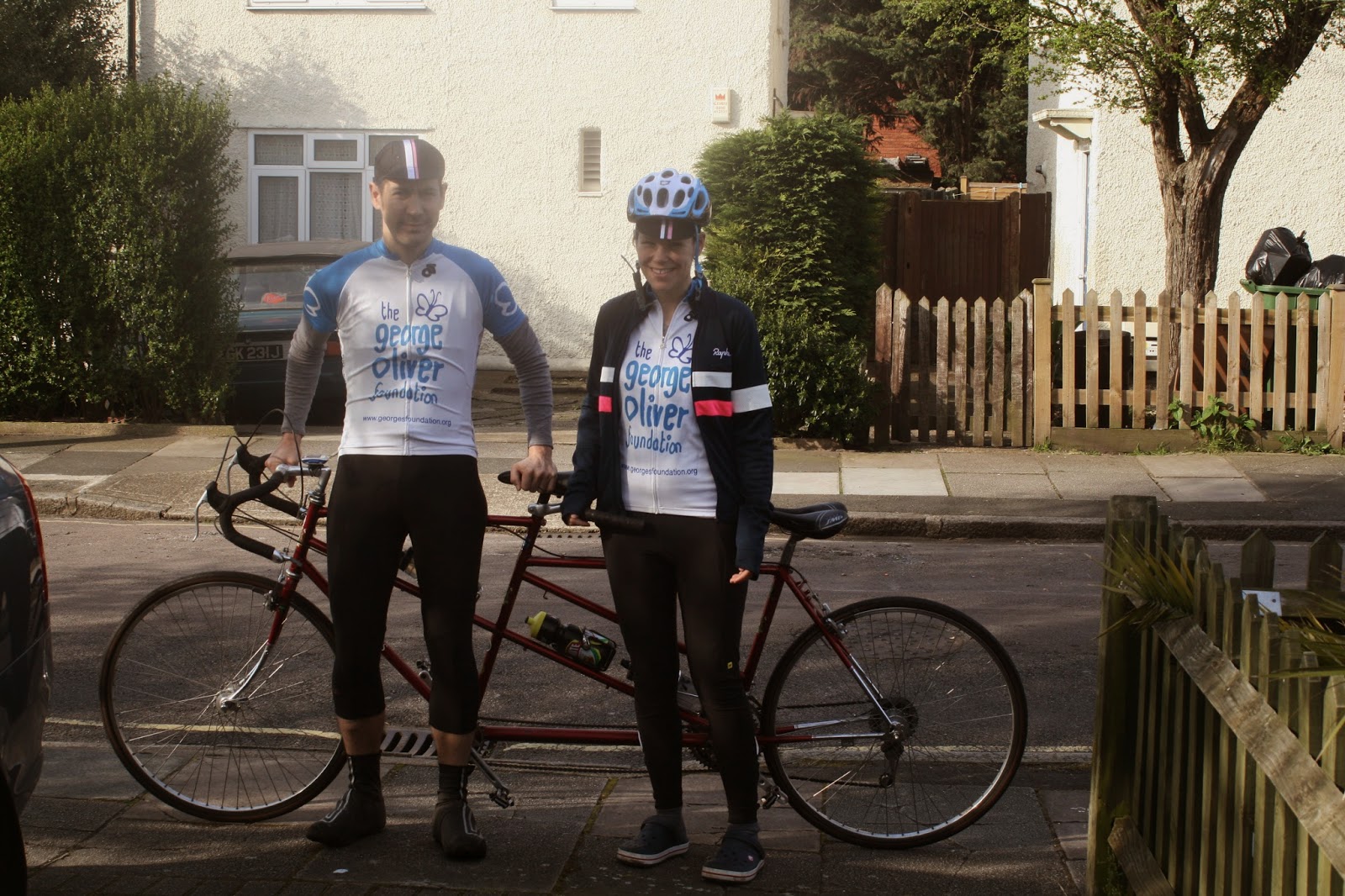 A combination of family (Auntie Les and Grandad and Ro-Ro) were looking after the kids and I had driven down the previous night with a car with a tandem rack on to bring the bike back. The weather was fantastic, all we had to do was ride a bike we had never ridden before 57miles to Brighton, over some decent sized hills and over a distance more than 3 times the amount that Emily had ridden for well over a year and a half. Gulp. Oh - and she was riding with "SPD clips" on her shoes for the first time..... 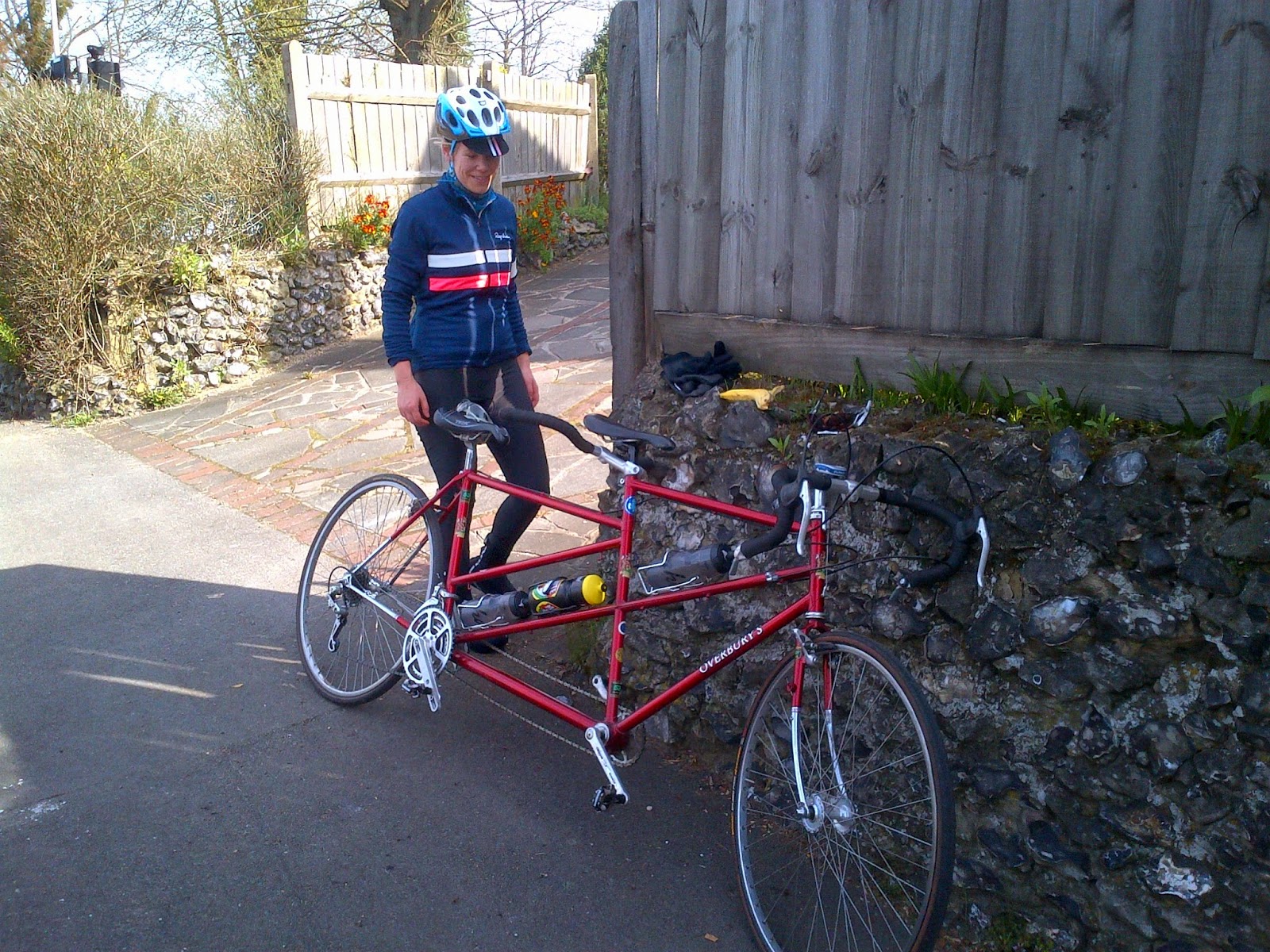 We were actually incredibly lucky - we had a lovely day for it. There was a stiff breeze that was in our faces/blowing across us for most of the journey, but far rather that than rain or cold. The sun was out and it was properly beautiful.

Em did call a few more stops than perhaps I would have otherwise taken - but this was advisable and we took the opportunity to get food and water on board and stretch out - I think she was also getting bored of the site of my backside all day! 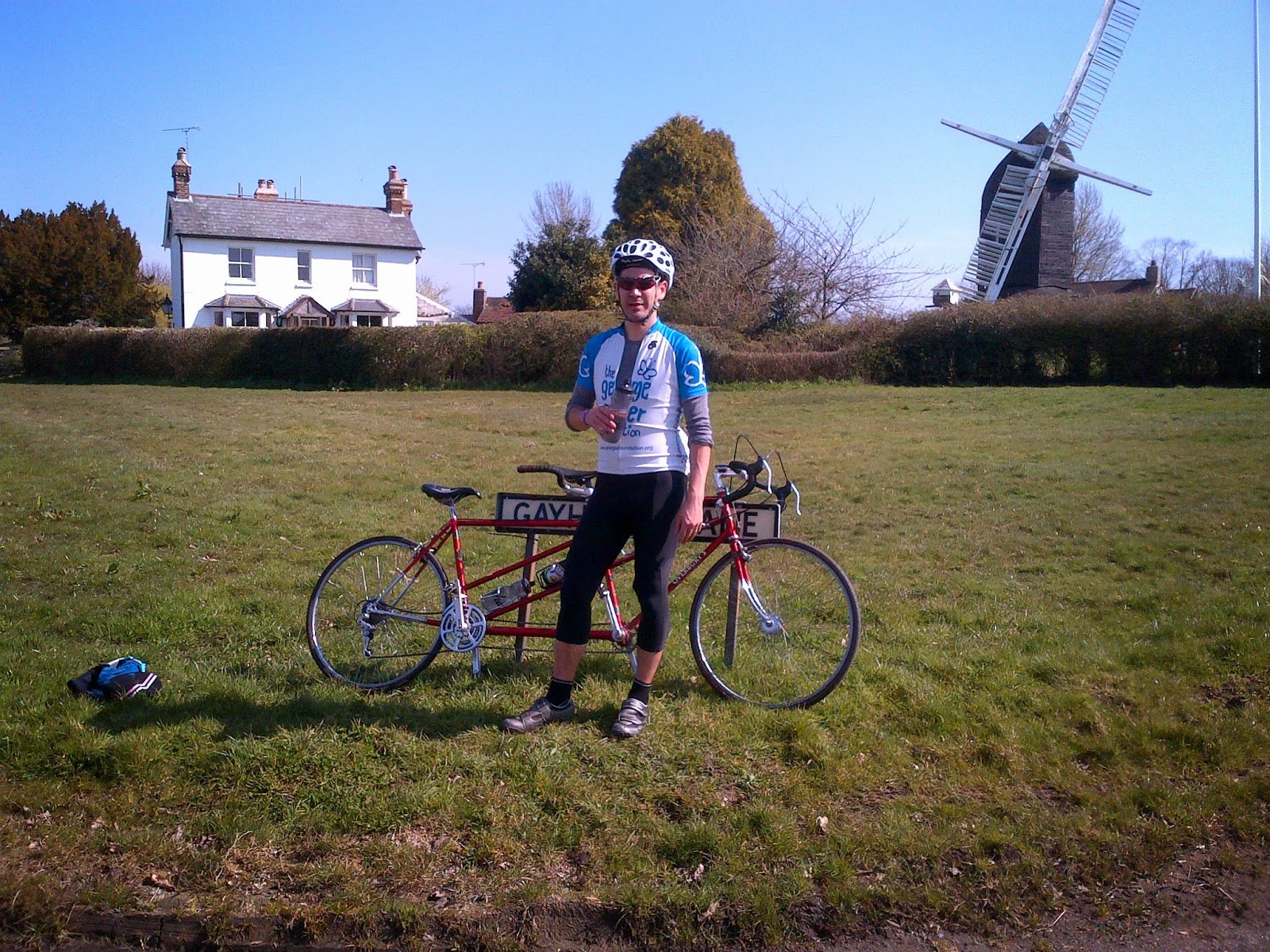 We made decent time on the tandem. It is also really nice riding a tandem - you can speak to the person behind you, other road users give you a decent amount of room - perhaps because of the novelty and on flat/slight downhill stretches, you can really fly. Of course, it is a test of your team-working and communication skills and I am happy to say (despite comments of friends who know us both!) that Em and I managed really well.

It was good as well to show her some of the lovely sights that I had seen whilst riding - such as the windmill that I always take the opportunity to stop at and take a quick photo! Although she was definitely seeing it at its best in the sun! 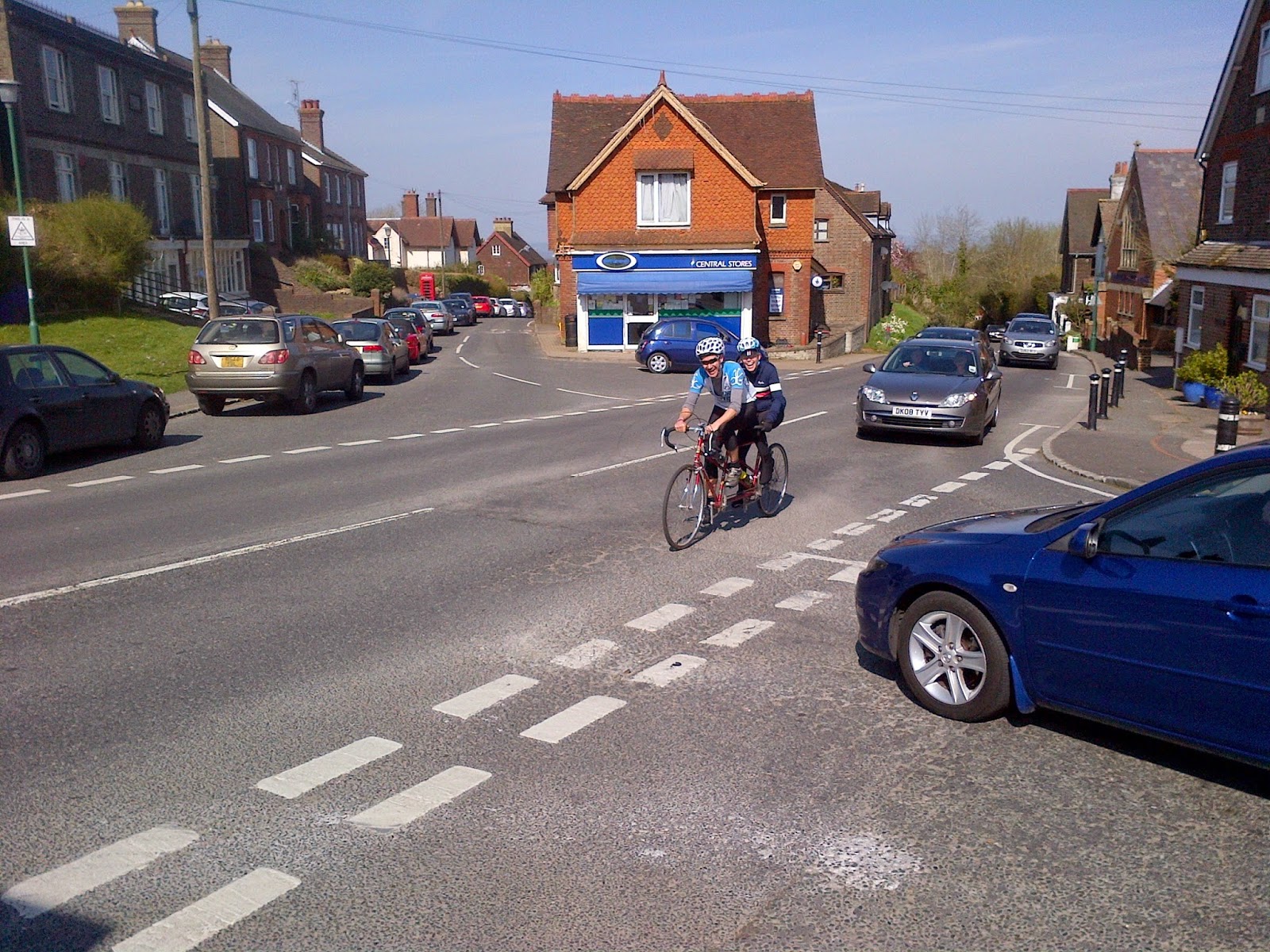 Above, you can see us slogging up Turner's Hill - please ignore the queue of traffic behind us - its always bad through there - honest!

It was lovely at Turners Hill to see my old friend Al - he previously had done a challenge for us (read about it on our website - the crazy O Til O swimming/running race!) and came along with his daughter Sophie to cheer us on. So nice to see them both and the words of encouragement pepped us up especially after a steep hill!

It was really fantastic to see him wearing his George Oliver Foundation t-shirt too! Properly "on message"! 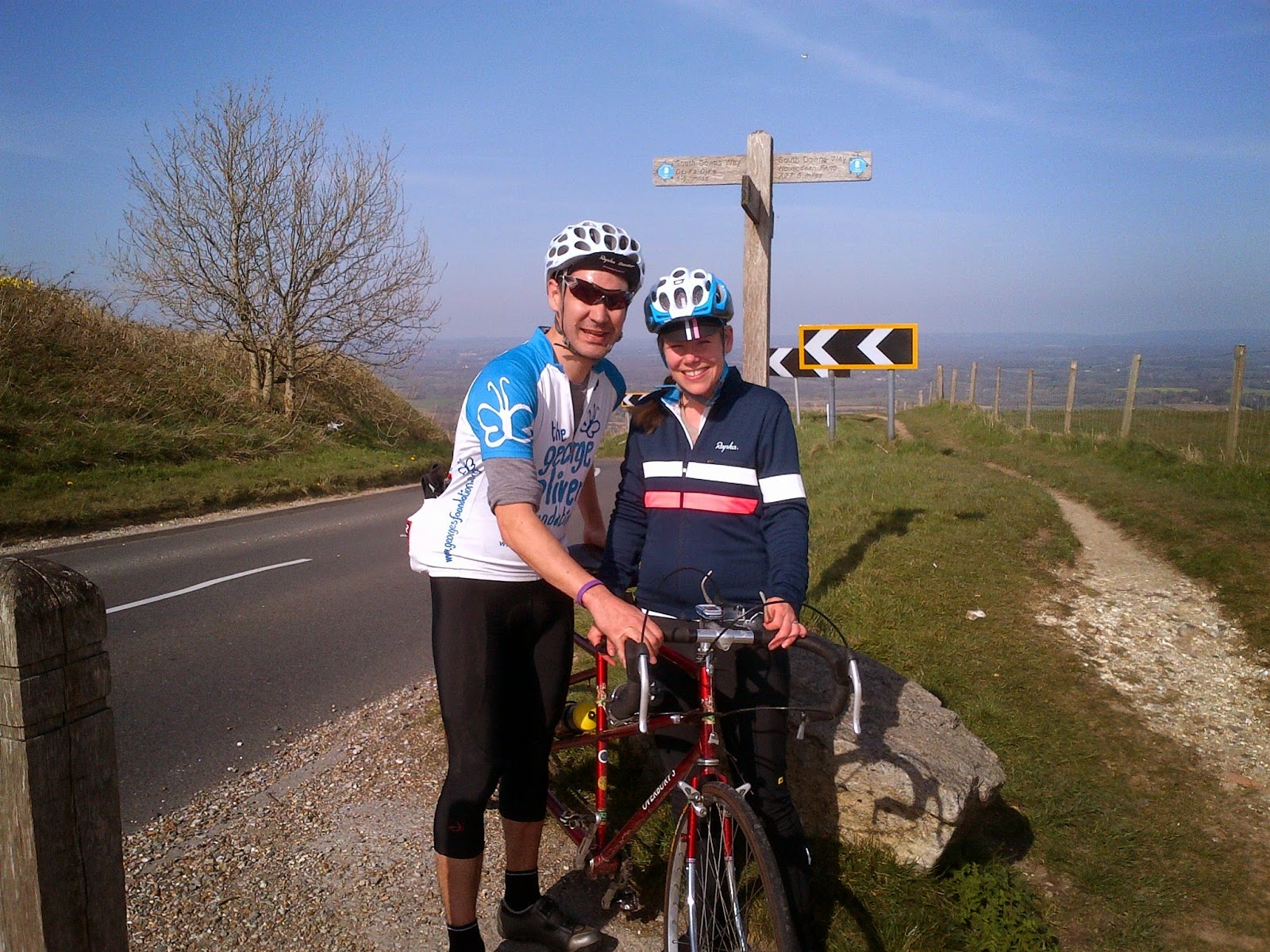 Ditchling was a massive grind - we dropped into our lowest gear and tried to twirl up it as best we could. We did overtake a "roadie" - he wasn't moving very quickly though! Em had her eyes shut I think for about a mile and a half of it. I was willing it to end for a good while too.

Big smiles at the top though - the biggest hill Em has done by quite some considerable way (trumps anything in Richmond Park!) and we were rewarded with some great views over the South Downs.


I felt a massive sense of relief when I got to Brighton - I will sum up my feelings on the challenge in another post - but it really was a tough one this one and I'm so glad to have completed it in time. 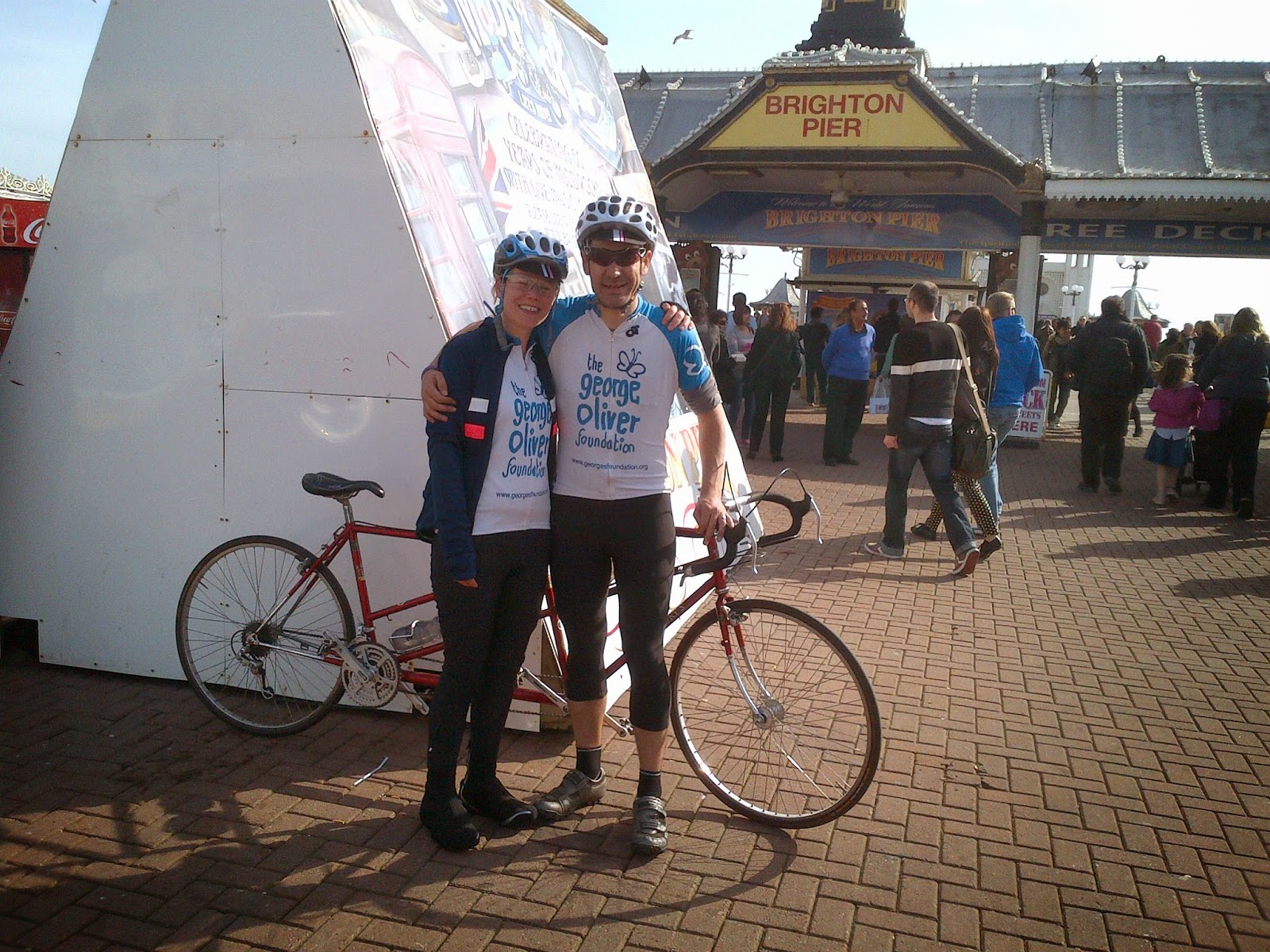 I asked Em to jot down some thoughts and they are as follows:

I was extremely apprehensive about the tandem challenge, not least because I’d only managed to get out on my bike about four times since November 2012 and I still couldn’t even face the miniature hills in Richmond Park! Plus still feeding Orly in the night means I’m not exactly well rested either....eek. I was also a bit battered from falling off twice the previous weekend as I’d foolishly decided to start riding in cleets (feet clipped in) for the first time and managed to crash down in fine style forgetting my feet were attached to the pedals OUCH. Boo hoo poor me etc....!


But the brilliant thing about a tandem, despite the fact that people regularly shout at you “she’s not pedalling!”, is in fact exactly the opposite – you don’t have a choice, you just have to keep on pedalling, giving up is simply not an option. Many cyclists I’m sure would agree there’s nothing more demoralising than seeing the person in front of you gradually slipping ahead into the distance. It happens to me quite a lot! But on a tandem the beautiful sight of Mark’s back wasn’t going anywhere. So we grafted through it and even actually enjoyed some of it. Cruising along the top of Ditchling Beacon was an incredible feeling, especially as I don’t think either of us thought we were very likely to make it all the way to the top without walking. The views are amazing and of course we were very lucky with the weather as well.
Most of all though the thing that got me through it was George. As with everything that I do, I know he’s there and I know that will make me strong enough to do anything. I’m really proud we did the ride and I’m especially proud of Mark completely the whole 12. What’s next?!