Not just any BMX bike - oh no. Nothing less than a Raleigh Burner... In the classic blue and yellow - look at that bad boy!!!! 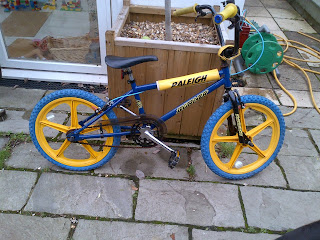 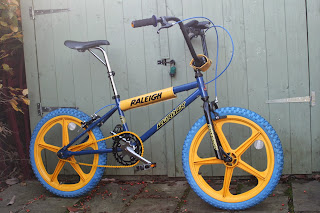 I always wanted one of these as a kid. I had a different Raleigh BMX instead and when I saw one of these on ebay - I thought "that'll do perfectly for the 12 in 12". I picked it up in Fulham, from a lovely fella who was, I think it is fair to say, a bit of a hipster. He said his girlfriend was making him sell it and either there was a bit of sadness in his eyes as I rode it away, or he couldn't believe that he'd got rid of it for cash. 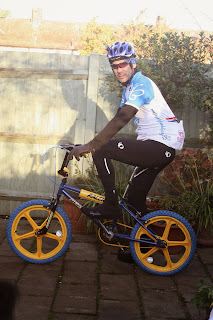 It needed a bit of TLC, new chain ring, new freewheel, a new seatpost (as the seatpost that was on it was about 2cm big and had me riding with my knees around my ears), new cables, new brake pads, a new chain.... But look at it - doesn't it look lovely?!

I probably should have leapt out of bed this morning with the idea of riding this bike, but it was cold and I was nervous about the prospect of riding yet another hideously uncomfortable bike all the way to Brighton.

Indeed, my knees started creaking about 2 miles into the ride, but they didn't seem to get any worse. The problem was that I couldn't extend my legs fully at any stage - the saddle just wouldn't go high enough. 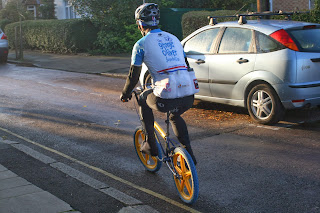 I was also hanging off of the back of the bike in the saddle position, so pedalling was a bit difficult - and to get out of the saddle, I had to drape myself over the top of the bike. As is usual on these rides, I had to get the magic spanner out just after Croydon as I noticed only one of the back brake pads was on the (Mag) wheel rim and one of the front brake pads was seemingly using the tyre rather than the rim for purchase. 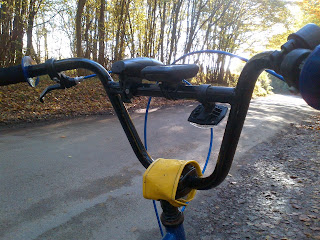 What was nice was the reaction of some people I went past - shouts of "nice bike mate!" from the street and a cabby winding down his window to ask me if it was my actual bike and wishing me luck. What wasn't nice was the impact of the hills which were difficult. The gearing wasn't particularly tough, but I couldn't get any leverage to get power into the wheels and on the first major hill, my legs gave up the ghost and the chain started "misfiring" on the freewheel. My fault of course - I hadn't tightened up the wheel bolts enough and the chain had pulled the wheel forward and lobsided. 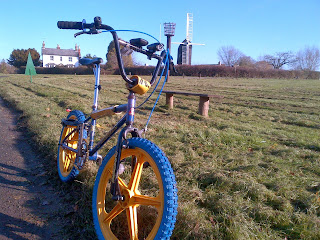 I will say this for the Raleigh Burner - it does push well. The other thing that it does well is descend. You'd look at the bike and think (especially in comparison to the TT bike and the recumbent) - that is the most un-aerodynamic bike in the world. Look at your body position. Look at the silly, heavy steel piping, look at those massive nobbly blue tyres (oh yes!) But something about it was just amazing fun to descend. With one gear, there was no point turning my legs over 17mph as I couldn't spin them fast enough to make any difference to my speed - so I "tucked in", made myself as small as possible and enjoyed trying to make the speed as fast as possible. Yes, the speed wasn't that high - but it FELT fast, which is the single most important thing. 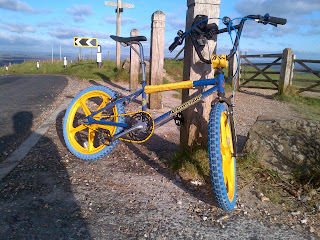 Ditchling defeated me again. As did Turner's Hill. But all the rest were climbed (albeit slowly). My legs felt very tired at the end, but those moments going downhill, the time in Brighton where a big hell's angel type roared up to me and shouted "a RALEIGH BURNER!!!! THAT'S WHAT I'M TALKING ABOUT!!!", even the tree surgeon who leant out of his truck to say "That's a sh*t bike mate!" all made me smile. My average speed wasn't horrendous. Whilst I needed a restorative bath for my aching legs when I got home, I can still walk. It was a beautiful sunny day and I'm so happy that I finally got a chance to have a rag (and a very long rag at that) on the bike of my childhood dreams. 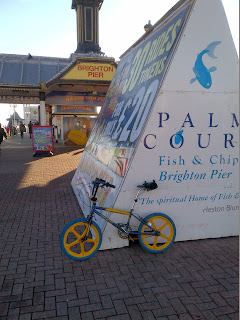 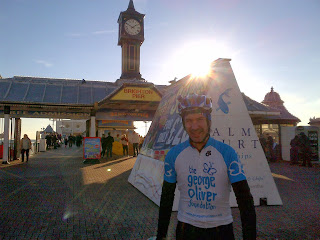