Right. This should be a breeze right? I mean a time trial bike. That's the bike that Bradley Wiggins rode to Olympic glory and gold. This should mean London to Brighton is a stroll in the park.

This is Bradley Wiggins on his time trial bike:

Not a lot of similarities there, I think you'll agree - we're both riding a bike, but Wiggins' Time trial bike is a lot spanglier than mine - he has what is termed a "very good shape" on the bike, I don't and he also looks like someone who has been fitted and spent days of training on his bike, honing his position and style in wind tunnels and roads around the world. I look like a bloke who has bought time trial bike bits on the internet, tried to put it together, failed due to the really tricky internal cabling, got help from a nice Australian man called Bruce (seriously) and ridden it once. To Brighton. 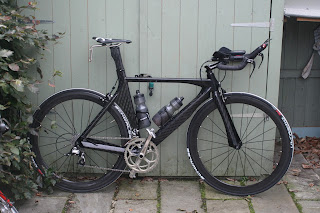 So this is a time trial bike. It is designed to be "slippery" in the wind, to be as aerodynamic and quick through the air as possible. This effect is totally ruined of course when you put a human on it which destroys all the clean lines of the bike. As you can see - the seat tube (where the saddle goes on top of) is designed to fit around the wheel to reduce "drag". The wheels are made of carbon and are "deeper" section to reduce "drag" and also to reduce "drag", you have to lean on the funny bars with your elbows. These are worth looking at in more detail:

Basically, when you are going along, you have your hands on the bits in the middle with your elbows on the pads. If you need to brake, you put your hands on the bits on the outside and hope you've moved quickly enough. The aim is to spend all of your time with your arms on the middle bits. Which after three hours is pretty painful. But it makes you "quicker" (see blurry photo for proof!). 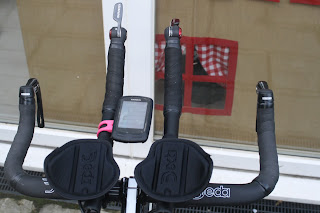 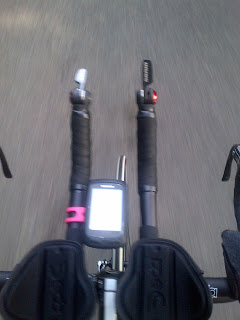 My usual early morning set-off was undertaken with the family still asleep. I hopped onto the bike and headed off. In an attempt to maximise my speed, I had put a contraption on my seat which would hold my water bottles behind my backside (again reducing "drag"). As per usual, this "genius" idea could have done with some prior trialling as I lost my first bottle out of the holding cage going over a speed bump 40m from my front door. By the time I got out of London, this had happened 6 further times and I had to pull over and attach the cages to the frame where they did a faultless job of retaining the bottles. Oh well. ﻿﻿
Apart from the antics of my flying bottles, things were going smoothly - compared to the Dutch Town bike, being on a fast, skinny tyred bike was like driving a Porsche compared to a Fiat Doble. I was flying along and making decent time. I was even able to take a photo of my flying along and of a windmill I spotted for the first time along the way! But the aggressive position was taking it out of me a little bit - I was getting pretty uncomfortable in my neck and shoulders - unused as they were to me being bent double and taking the weight through my forearms. 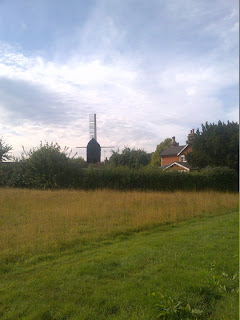 But to be fair, I was making very good time despite the discomfort - Ditchling Beacon was a challenge dispatched with aplomb and even the sneaky last hill into Brighton was dealt ﻿with ok. A very nice man at the top of Ditchling complimented me on my nice bike and I tried to be gracious as I rolled the knots out of my shoulders and arms. 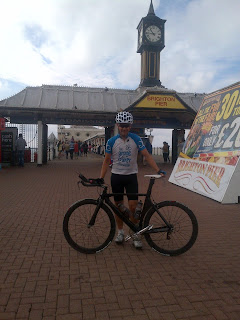 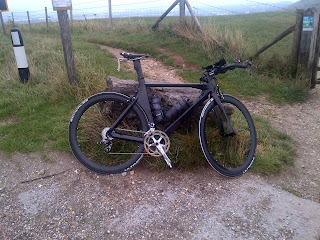 So my analysis of time trial bike is - yes, it is fast. BUT it is also the sort of bike that you should build up to long rides on so that you can get used to the position and I probably should have started/done a couple of short rides before trying a really long one. I doubt very much too that I was considerably faster than I would have been on a road bike (largely because towards the end I was getting out of my "aero" position a lot to try and get comfortable! 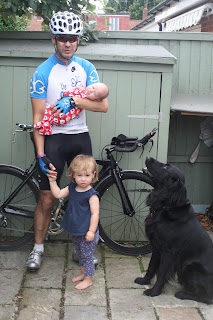 Strava details here: http://www.strava.com/activities/75426959 getting closer to the 3 hours than the 4 hours plus on the other bikes and the 6 hours off road!﻿
Posted by mroli at 14:34